Some you win, some you don't

Our fellows started tonight's session with a three hour fight trying to finish off the Scorpion Man and the Broos attacking the bridge near Grey Dog.  In the end they prevail, and they gather some impressive awards.  When they learn of a kidnapping that took place during their fight, they think not one second, but decide to go rescue the damsel.  It does take them the rest of the night to come up with a plan though.  Rather than setting up in several locations at once, they gamble and set up stake near the Stead controlled by the Gagarthi, and when they actually do run into the messengers they expect, they manage to alert the entire gang.  Three of them manage to escape in the pitch black, but Aylwin is captured and taken to the Stead for interrogation.  If you listen closely you might hear his incessant screaming.
Geen opmerkingen:

Baboons on the prowl!

Our party decided to split up after they assassinated the yelmalio rune lord on the crossing of the Jonstown to Runegate road. They meet up with two Grey Dog nobles, and decide to travel together. When a playful baboon tries to steal some food, they decide to take vengeance and murder its entire family, including old uncle Huglug, the favourite storyteller of the baboon babymonkeys (aaaaah). 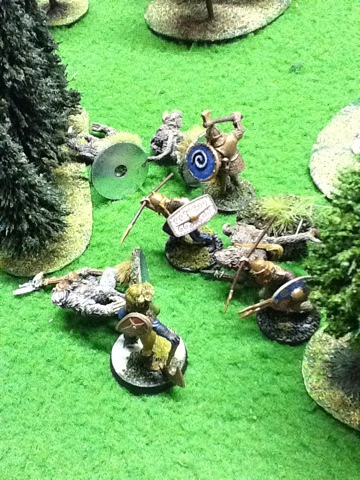