Fazzur 'Bookworm' Wideread is the Lunar instated governor of Sartar, currently residing in Boldhome. He's a general from Tarsh, born to the Orindori clan, son to Vostor Blacktooth. He is a Yanafal Tarnils worshiper, and a member of the Scarlet Scimitars, a Yanafali sect striving to keep the blood pure. He was dismissed after a discussion with Sor Eel about how to handle Pavis in 1610, but was reinstated to suppress Kallyr Starbrow's revolt in 1613 and made Governor General of Sartar afterwards. He loves horses and hates Ducks.

I intended to no longer paint big batches of miniatures, but I started on a big bunch of Trollkin nonetheless, so I'll post an occasional update. First thing was the skin tone foundation and a light brush for some depth.
The trolls have been getting some much needed attention as well, here they are, skin tones done, metal done, and ready for a pass of leather.
All these mini's are from Mad Knight Casting, specialized in fine Gloranthan miniatures for skirmish and RPG. 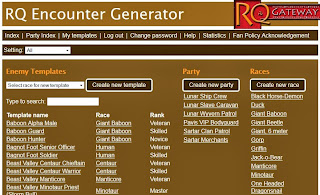 Since several weeks Erkki (Skoll on the TDM forums) has been working on the RQ Enemy Generator.  It is becoming a brilliant tool for Gamemasters.  With a bit of help on the content and feedback from Hannu and your truly, the RQEG is becoming an essential piece of kit for the time-challenged GM.  Browse the index, select a setting, or search on race, culture, cult, or alignment, then generate your enemies.  You can generate one enemy, or twenty, or a party consisting of various different enemies, you name it.  The RQEG is constantly being improved, and its content is entered by the users.  You can maintain your own templates, or clone someone elses and make it your own, the flexibility is impressive.

Take a look at The RuneQuest Enemy Generator now!

Monster Island and Book of Quests

Shiny new goodies from The Design Mechanism! I have received the paper versions from these two much anticipated scenario books from Loz and Pete and several free lance writers that wrote adventure for Book of Quests. When my players glimpsed the books - just before I managed to take them out of sight - one of my players, who plays a sorcerer and who tends to be slightly overpowered against low and average opponents, much to my occassional but well hidden frustration, read the subtitle of Book of Quests.

Evidently, I said nothing more, answered questions with more questions, and left him to stew for a few weeks :) I love being a GM, especially if you have good players who can take some abuse :D