During a bit of DIY at our clubhouse I had a nice distraction with a bunch of members playing a big armageddon battle on a 6' x 8' table. Here are some pictures of the battle. Some amazingly painted miniatures on there, and others that were not so amazing. I started modification on a Revell Viking Drakkar for my Ingilli Warship that the Lunars have confiscated in Corflu. First stage was glueing the hull together and fixing the deck, and it got ugly immediately afterwards: Dremel through the entire hull lengthwise, without damaging the deck, but not more than 3 mm below. Add to that the tendency to stick back together after using the cutting disk, and it adds up to 15 minutes of stress. Still, it worked out fine, and I slapped a sheet underneath, slapped on half a bottle of slo-zap, a morokanth's weewee's length of green stuff, and it's hardening as I write this. Time for a Roll 20 upgrade session now...

Trolls on a roll

Here are some specific Glorantha miniatures to be used with RuneQuest.  In a first time, the first three pictures will serve as a Troll trader, Gunt Leadfinger, a traveling merchant working in the Prax region, and his two very impressive bodyguards, current name Ben & Jerry.  These two specimens are the biggest, meanest great troll around, they have excellent equipment, and the vouch for the safety of Master Leadfinger.

Some new miniatures for RQ

Nice new miniatures I finished in the last few days.  Some will serve as adventurers, others will serve other purposes.  These are Reaper mainly, could be a few other brands though.  The giant has been lying around for over a year now, I forgot where I got it from.

Here's Rick Meints final update to the kickstarter project after it concluded with 260K€ just now:

Jeff and I would like to thank everyone for helping make the Guide to Glorantha project an amazing success, and one that has exceeded all our expectations. We hoped to raise $50,000, dreamed of raising $100,000, and laughed at the prospect of any more than that.

After the Kickstarter ends, we'll be sending out the survey, we'll have time to work out all the add-ons, and all the other "admin" side of things as well.

We're overjoyed at the community of Gloranthans that has formed around this project. We sincerely see this as the start of something new, with many more great things to come.

As always, we thank you for your support.

I have slapped some paint on my most recent sculpt, and it looks nice enough. I think I'm gonna make a few more, a trader with a notebook and a herder come to mind...

Rumour has it a power-hungry sorcerer has taken residence in the Puzzle Canal in the Rubble. We heard that this sorcerer deals in dark and powerful magicks. And that he has a Giant assistant, as well as a heap of small minions, hitherto undefined. To feed this giant, the sorcerers minions need to undertake regular cattle raids, why, they'll even capture humans to feed to the monster. Also, apparently, said giant is well armed and buffed, and a real challenge for any party, if they could find him. The nature of the sorcerers alliance with this giant is not known.

Do Morokanths have a weewee?

I think this Morokanth is finished, I'm gonna let it harden, basecoat, and then paint it up over the weekend before I start on the next one. This one, by the way, is a male Morokanth.

I know, I'm vulgar :) But Bif the Morokanth is happy!

New terrain for Pavis and Corflu

The pier was designed by Ben and quickly painted today, the temple hall is the start of a modular system for representing rooms and corridors. Looks fine, but there's a lot of casting involved...

Hard to find a miniature Morokanth for the Glorantha universe, so I am having a go at sculpting one myself. The body shape is getting there, it just needs a bit more flab on the arse. I quite like the pose, lunging with the short spear, it is gonna be used for RPG after all, so a bit of violent appearance is always good.

I'm giving it a wicker shield with a nasty pin, still thinking whether they'll be prudish enough to wear some kind of loincloth, or if they'd rather walk around tackle out, swinging freely in the Prax morning air. Other bits of must have equipment: a chain for the herdmen, some pack, and animistic tidbits like skull, some boney things, or bird feathers maybe.

Last but not least a funny looking helmet may finish it off, but maybe that's just too much...

Alexander needed a riverfolk noble with a scimitar. As reported in a previous thread, I converted two miniatures to have a foot and mounted version. Here it is painted up.

For the last few weeks we have been playing some very enjoyable scenarios located in Prax. The party has been clearing out chaos, has been sucked into a heroquest and aided Orlanth in capturing Daga. The full stories will appear on the Hiording blog shortly. This blog has been retitled to 'A Colymari in Corflu' to stay in the mood.

Test building for the Big Rubble

In parallel with making buildings for New Pavis, I'm also preparing a set of ruins for the Rubble. Or at least I intend to. Here's my first attempt, still a WIP,of a nice ruin in Manside. I'm gonna go for a mix of a few styles, ranging from egyptian to babylonian, I hope it'll look convincing. I'm gonna roughen this one up a bit, and then paint it and see what it looks like.

Rejoice!  On November 18th, Rick Meints has launched the Guide to Glorantha / Argan Argar Atlas project on kickstarter, with a target of $36.500.
Update: the project hit 75K! Go East! – We will super-detail Kralorela and Teshnos down to the small city level.
There are several more stretchmarks, with additional areas that will be detailed, and who wouldn't want a fully detailed atlas?  So all you Gloranthaphiles, go join the horde, you know you want to!  I did, I am getting a nice hardcover GtG and the AAA, plus PDFs, so you can call me a happy bunny!  The tome is practically system-free, so will work for RQ/HQ or any other system you might want to use.  The artwork is inspired, in places it's downright brilliant, and it's gonna add so much flavor to the playing experience, I can hardly wait. 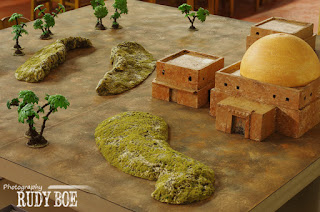 Far from finished (The rubble is gonna be a particularly hard task :D) but here is an update with some hills I got at crisis, a few palm trees, and some of the buildings I am working on.  The Pavis temple is basecoated as well, I'm hoping to be able to finish some more stuff this week.  I am particularly happy with how the new buildings turned out.
Geen opmerkingen: 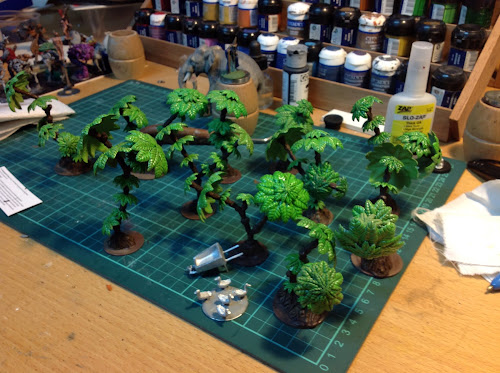 At Crisis, I bought a nice collection of basic palm trees in various sizes from minibits ( Pendraken ) and then I ran into a booth offering these palmtrees with a twist, completely painted, just needed to put a metal base underneath for stability. These will never make it on a desert table for historical games,but they look just the part for my Praxian oasises in RuneQuest, so I got both bags, a bit of basing and washing, and pronto! 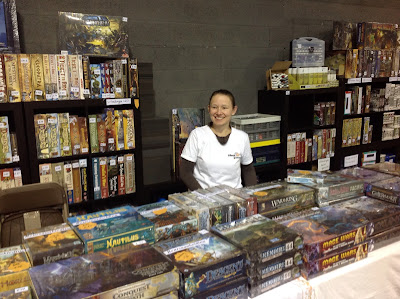 My players like playing with miniatures: they need to have visual clues when roleplaying, and most of them also play miniature games like Warhammer and Malifaux.  They like to have miniatures fitting their character, and preferably both a mounted and unmounted version.  Now there are some manufacturers that offer a few of those, but nowhere near a full range.  It's even harder if you're not playing traditional medieval.  So often the only resource is modding.

One of my players' characters is a Riverfolk Noble, so we were looking for a mix between a gypsy, a mongol and a saracen, something along those lines :)  We found a Reaper rider that more or less looked the part, be it a bit modest, and a Reaper foot figure with a cape and scimitar, although he wore armor and a helmet, which he didn't want.


So I took out the ole Dremel and my huge set of mini-lathes and drills, as well as a big blob of grey stuff, and I adapted the miniatures as requested.  Talk about spoiled players :)

Here is the foam model of what is to become the Pavis temple in New Pavis. It's a bit underscale, if not it would become near to useless, but it'll evoke the new pavis feeling just fine, I'm sure. Next job is a brush paintcoat with thinned black acryl paint and a big brushing session to get the dirt brown look I want for the wall and the pink / brown look I want the pyramid to have.

Here are the dark troll skeletons I painted this week:  painting these is a breeze, 80% drybrushing, and I finished all four in about 2 hours.  And they look fine for the game table...

Well, technically they're not all friends, but here are a few personalities from the Lance and Laser series I finished this week.  I can only repeat that working 2 or 3 figures at a time is a way more productive way that trying to paint 40 at once.  It may seem like more efficient if you use one colour on 15 figures at once, but progress is too slow, and you get demotivated.  Way better to see one or  two miniatures finished after a good long session.