The mob in tights

We had an eventful adventure, with our companions making a very good impression on the folk of Grey Dog Village and surroundings.  Aelwyn killed Elrund the butcher, a lieutenant from a local racketing syndicate that was slowly becoming the scourge of Grey Dog.  Of course, this triggered some nasty reactions, but the operatives sent failed miserably in their task.  After Blanka left for a surprise party at the local brothel, four of them went and located the gang headquarters, but they realized a frontal assault was suicidal.  Now let's hope nobody dies.
Geen opmerkingen:

Second Floor interior and some extra's 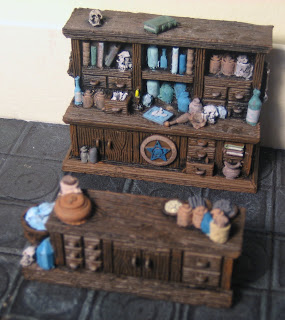 Let's start with the extra's: I have gotten the Alchemist Shop Friday, slapped some paint on it, just needs a bit of detailing and pin washing and we're good to go. 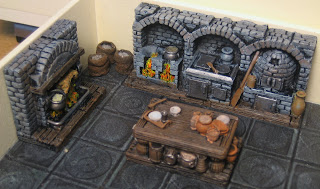 I also ordered the Kitchen set: a nice touch to complete the Inn, with fireplace, pizza oven, and an atmos that is slightly to modern for RuneQuest, but amist I bovvered forsooth? 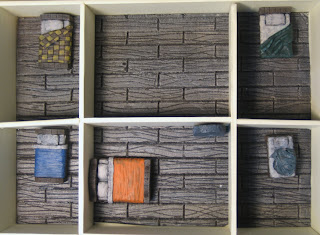 Here's the main feature, although it's not looking like much compared to the splendid complete interiors above, these beds are still gonna add a lot of spunk to my Inn rooms for sure.
Geen opmerkingen: 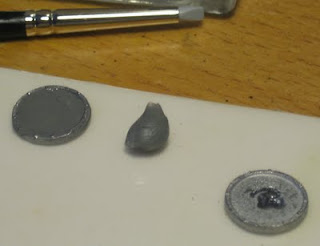 I clipped off the pin on the viking shields and cut off the remnants, repaired the damage with some putty and evened things out with a pencil shaper and some vaseline oil. 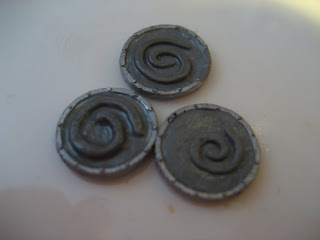 Then I took some tries at putting an air rune on the shields.  One is a little rough, but the second and third attempt worked really well.
Geen opmerkingen:

Some new miniatures from The Foundry

I have 3 KR cases full of RuneQuest miniatures, but there a quite a few players who suddenly went all axe-y on me, and it turned out I have only one character wielding the one-handed battle axe and buckler shield.  So I promptly dispatched an order for more of those, and I added a trio of Lynxes - big fat lynxes too - for Orlanthi that want a traditional pet, and, later, if and when they make it to Rune Lord, for their allied spirit.  The Lynxes do look like pets that have been overfed for a few years, rather than a lean predator, but I can live with that.
3 opmerkingen:

Making a second floor for my inn


Although I was unable to start a barfight Saturday, I'm not despairing: I have started work on the second floor of the Inn, the idea is to make a wooden floor, and then add some room walls, some nice beds from Scotia Grendel are underway to finish things off.
Geen opmerkingen: 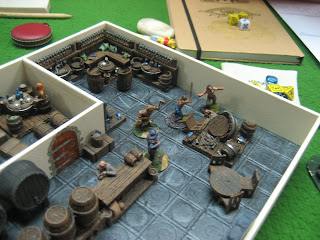 A fellow might lose his spirit over it: I set up a nice bar, with lots of barbarians from other tribes, most of them not best friends.  I even throw in a few Storm Bull cultists on a stag night, and a small gang of cave troll on a mercantile mission.  I make a wonderful bar playing area, put all the sweet scotia furniture in, and get my NPC's to call the adventurers names, insult their mums, and otherwise offend them, and the party refuses all cause for fighting and decides to be wise and civil about it.  It would have been much more convincing had they not started fighting amongst themselves later during the session, however.  Another nice session of RuneQuest last night, with some second thoughts about a certain lack of cooperation.  Lots of muscle, but not enough out of the box thinking, that's my diagnosis.  In the end the party, still a flock of unexperienced adventurers, decided to travel to Snake Pipe Hollow and get rich quick.  Hey, if it was so simple, everyone'd be doing it!  The scenario ended with our brave barbarians being under attack from a small gang of Tusk Riders.  Bad news!
Geen opmerkingen:

Gamers are a weird breed, and the ones at HQ even more so.  Someone came up with the idea of organizing a 24 hour non-stop gaming session, and behold, a small dozen of gaming geeks responded to the call.  From 9 AM, our gamers played a succession of boardgames, and we went over to support such brave behaviour, although we had no intention of doing a 24 hour tour ourselves. 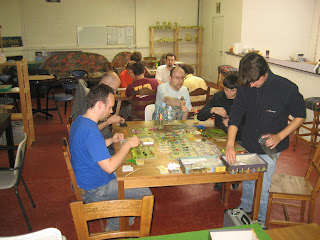 Still fresh and in high spirits, after a mere 7 hours of gaming everyone is still looking fresh and crispy. 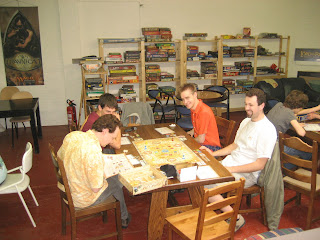 A rules dispute? Grognard alert?  Or are they just posing for the photo? 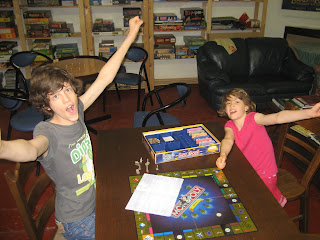 My kids love games, and they did not want to miss this, so by noon we were participating.  Mind you, my daughter, aged 7, I escorted back home by 6 pm, but my son stayed and played a scenario of RuneQuest with us until well after 2 AM the next day, at which time I had to break the scenario off in the middle of a fight, much to the dismay of said son, who would not have objected to staying until 9 AM like the rest of the gamers.  That would have put me in a difficult domestic dillemma, however, so I ruled against it.
Geen opmerkingen:

Working on the Grey Dog Inn

I'm a firm proponent of visual clues when Role Playing.  The player's imagination can and must be stimulated, but I prefer to have control over the look of the scenes I tell about.  Then the player can use his imagination on just about everything else in the story.  I just like to have a common starting point for my story, so I make a few houses and other buildings, and in this case I am working on the interior of what I believe will become a key building in my campaign: the Grey Dog Inn. 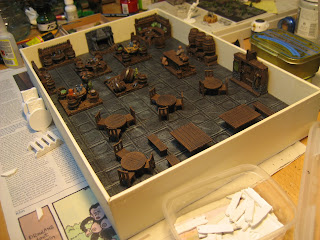 To be honest, what I am working on is more like a common denominator room interior with lots of room for customization: for the Grey Dog Inn I am preparing a private room and a staircase, as well as a cellar.  In other cases, this may become a library hall, or a brothel, or even a king's hall.  I made the thing from a 20 mm thick piece of green isolation board, which I carved in with a blunt pencil and lots of round and square  objects to create the 3D feel.  I then rpimed in black, and brushed up to medium grey in 3 or 4 thin leyers.  The result is fine: leightweight and sturdy, and looking real good for something that took 2 x 30 minutes.  Then I cut 3 mm foamboard to size to make the walls, glued with contact glue, and used wide masking tape to finish things off quickly: another hour.  I already had a lot of furniture ready, here is one set-up I have been trying.  I'll be making the top floor and cellar as well, already ordered lovely little beds from scotia grendel! 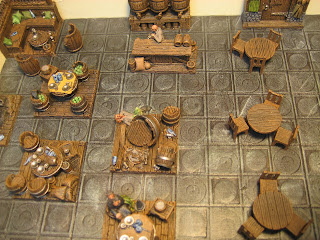 Another batch of miniatures, mostly from former L&L, now Armorcast, finally got painted and based properly, so here they are:

The holidays have started, and I since we are not going abroad I am having a lot of free time that I can spend on clearing some of the waiting projects on my workbench.  Today I finished a part of the Lance and Laser (mainly) miniatures I have been painting for RuneQuest.  One thing I learned is that painting several miniatures at once is a good thing, but doing batches of 50 numbs the brain.  I finally got through these, and I can now start on the other 90 or so I have still lined up for RQ.  But I'll be doing those in smaller batches, 8 to 10 at most, in order not to make it a drag. 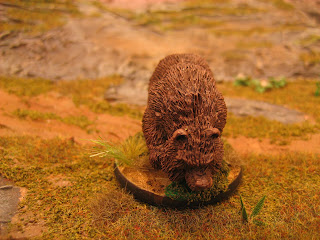 Here's a healthy grizzly that's about to be disturbed by a non-suspecting party member. 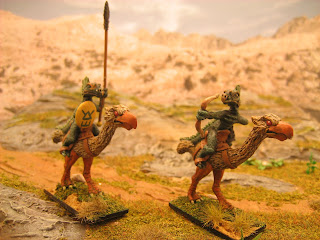 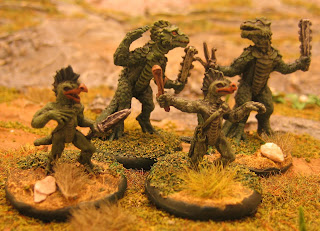 A dragonewt patrol with some beaked and some crested dragonewts. 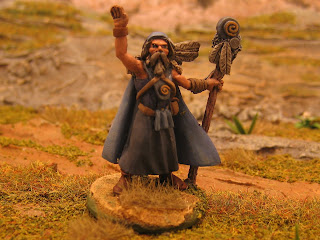 An Orlanth Rune Priest casting a spell.  It looks like lightning :-) 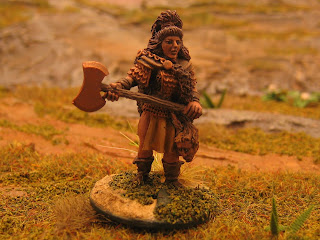 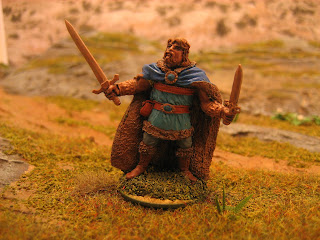 This is a Reaper miniature of Fhafrd, but I think he will do sterling service as the personal bodyguard of Kangharl.
1 opmerking: 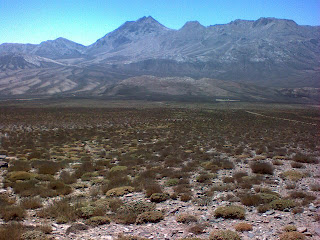 Chances are you already know this internet magazine, but if you do not, be advised there is an excellent and informative article on life in Prax in this edition: Life in Prax (part 1). Author is Andrew Larsen. This edition features some other excellent articles as well.
Geen opmerkingen: